Influenced by the line “the body becomes a cursor” from Julian Oliver’s essay “Perceptual Play,” Recalibrate comments on the relationship between the body and personal technology devices.

Ocampo and Oppel both wrote a text thinking about intimacy online and Foucault’s concept of a heterotopia; a space that exists outside of hegemonic power structures that can be mental, temporal or physical or a flattening of all three. A mirror and a phone call are both cited as examples of heterotopic spaces. Ocampo and Oppel thought it would be interesting to physicalize a mental space or embody and emotion. The way we communicate through digital devices could also be described as a heterotopia, as the anonymity of the screen sometimes serves to dampen societal norms. When communicating through digital infrastructure, we exist in several places simultaneously, making our experiences with networked devices heterotopic.

After both writing a text, lines were borrowed from each text and amalgamated in a video piece that animates the lines of text. The text warbles and distorts as it moves horizontally across the video plane. The intimate phrases are rendered a pale off-white colour against a black background. A second video was created alongside the text video in the same color as the text, this video, intended to be projected overtop the text, is used to render the text semi-invisible. This video is a vaguely bodily, fluid texture. The work is installed using two sets of projectors; two on the ground and two mounted approximately 8 feet high on a pole. This separation means that the content projected from the floor can be obstructed by the viewer, while the higher up projectors cannot. The lower sets of projectors play the fluid texture, while the upper projectors play the animated text. As they enter the space, the viewer’s bodies cast shadows across the wall, disrupting the textural video and making the pale text more legible behind their shadow. In this way, the body must be used to read the text and engage with the piece.

The text, though obstructed in the installation, is available to view in its entirety through printed copies on transparencies made available to take in the space. A mirrored representation of the installation, the text layers Oppel and Ocampo’s separate meditations on the topic of intimacy in networked environments. Together, each allow their minds to wander, as Ocampo’s humanizes digital experience through his writing, and Oppel digitizes human experience. Due to the low-light in the installation, the only method of reading the text is to hold the page against the video projection, adding an additional layer to the many existing layers of the project itself: Text on text, video on video, bodies in space, and bodies in interaction with text.

The piece also includes a two-channel audio piece of both artists reading their texts at the same time. Their voices are distorted through autotune and reverberation to mimic the overlay of embodied intimacy and digital infrastructure. The voices constantly change back and forth between left and right channel in order to activate the space of the installation. The speakers are placed far apart so that the changing placement of the audio is more noticeable. 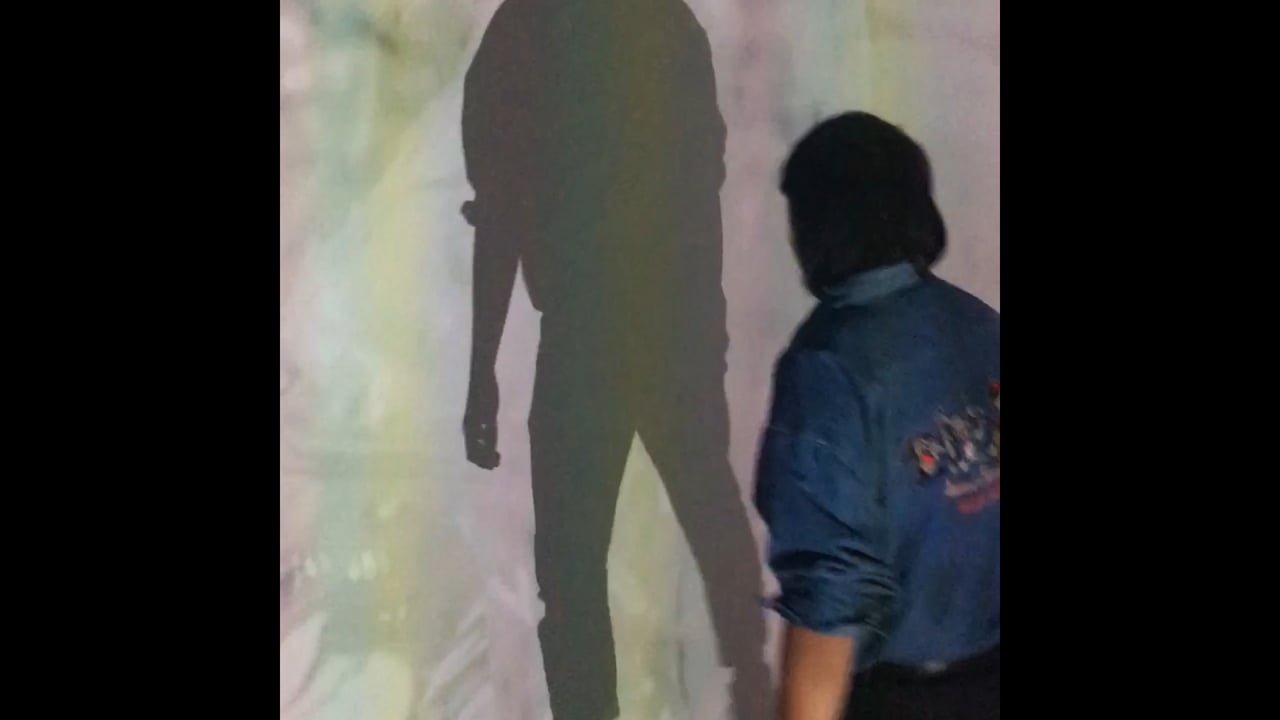